Someone is masterminding this from the top! - CEM KÜÇÜK

Someone is masterminding this from the top! 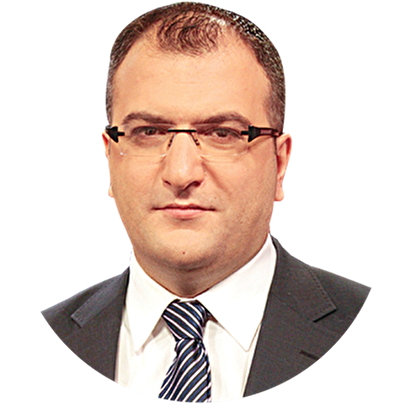 I, along with a group of journalists, accompanied President Erdoğan during his trip to Latvia and Estonia on Oct. 22-24. We asked Erdoğan a lot of questions on the return flight. Erdoğan’s answers appear in detail in today’s Yeni Şafak and other newspapers. The most important thing Erdoğan mentioned about the events in the Middle East was that “a mastermind at the top” was involved.

Just as I sat down to write this article, news came through that three of our soldiers were martyred at the hands of the PKK in Yüksekova. We thought that the PKK and its political extension the HDP (Democratic Peoples’ Party) would come to their senses after the provocations of Oct. 7-8, but it looks like they will continue to hit below the belt. There is no remedy for those that resort to hitting under the belt. To approach three soldiers from behind and open fire upon them is treacherous and bastardly. These shots were fired at Turkish-Kurdish brotherhood and targeted the reconciliation process.

Let us return to the mastermind at the top. Some countries and their intelligence agencies are making an all-out attempt to drag out the chaos in the region that started with the Arab Spring, led to the emergence of ISIL and now continues with the war in Kobane.

Overthrowing the elected Morsi via a coup and substituting him with the coup leader Sisi provided the first sign of a mastermind at the top. The Assad regime killed more than 200,000 people in Syria. Nobody even raised their voice. The deaths of 200,000 people just became a detail. The United States didn’t care because it thought they were just killing each other in Syria.

In the meantime, a new terrorist organization called ISIL emerged. It drew all attention to it. While it was killing Shia and Turkmen, the West paid no attention but when Kobane faced the risk of falling, the United States intervened. All the things mentioned above are already known. But some parties are trying all available means to draw Turkey into the trap. They are trying all methods to turn us into Egypt.

It is 100 percent correct that a mastermind at the top is involved in this. This mastermind is now even openly trying to bring Turkey to its knees. For example Germany; the PKK’s greatest supporter. Merkel tells Erdoğan that “we have filed 4,000 law suits regarding the PKK,” but there isn’t a single law suit for which a ruling has been issued. It is an absolutely diversionary tactic. The Germans are supervising the best organization seen within the PKK. It is a known fact that Salih Müslim has been hand in glove with the Germans right from the start. There is no other explanation for the PYD’s (Democratic Union Party, the Syrian affiliate of the PKK) severe insistence when it comes to Kobane. Nobody should come to Kobane but heavy weaponry should be dispatched. What for? The answer isn’t clear.

Another country in the region that is acting on its own whims is Iran. Its words and deeds don’t match in the slightest. It supports Assad and is not sincere on the PKK issue. It tells Turkey a different thing and when it comes to action it does something else. Turkey’s rival in the region is Iran and whenever it gets the opportunity it will do anything, including supporting the PKK.

Of course, the hawks in America are also doing everything in their power to destabilize Turkey. Some might call this a conspiracy theory but the volume of anti-Turkey news articles in the American media is not normal. Despite knowing the truth they are trying to carry out clear manipulations. Shamelessly, they say Turkey is aiding ISIL. You tell them to present clear evidence to support that and there is nothing there. It is all black propaganda.

Then there is the PR side of things. There are those that work against Turkey in America and the West. Israel’s activities are known, particularly in the United States. Such activities by Israel have increased even more since the Mavi Marmara incident. Members of the parallel gang, whose academic titles are questionable, move from city to city in the United States engaging in anti-Turkey activities. They denigrate Turkey by comparing Erdoğan to Assad. They say they love their nation and country a lot but, just like an intelligence agency, make the most disparaging remarks about the country.

You might ask who is engaged in the most anti-Turkey lobbying in the United States these days. The answer might come as a surprise. The United Arab Emirates is engaged in an incredible amount of anti-Turkey activity. They prepare reports and send it to the U.S. administration. They send notes to those in prominent positions that say that Turkey’s AK Parti (Justice and Development Party) administration -- Erdoğan in particular – which supports the Muslim Brotherhood is extremely dangerous. Naturally, behind these actions of the UAE lies Saudi Arabia and Sultan bin Bandar who is buddies with the neocons. This lobby is also the one that funds some of the American media outlets where these articles appear. It is a situation based entirely on an interests-based give and take.

Qatar, which has a similar foreign policy to Turkey, has been completely left out of the loop. The only country in the region that is disrupting this game is Turkey. They are trying to engulf Turkey in flames because it has disabled these traps. Given that Salih Müslim, Iran, Saudi Arabia and others wouldn’t be capable of carrying out all these events on their own, there is a mastermind at the top directing them via intelligence agencies.

It seems like this mastermind will resort to all means, even those we cannot think of. This mastermind will be behind the provocations that will shake our resolve. Actions will be undertaken to directly target the reconciliation process. But they will not succeed. Because the people of this country now know, right down to the slightest detail, what is going on. Colonialist minds will always exist but no power will be able to make Turkey backtrack from its own path. This includes the mastermind at the top and its partners.